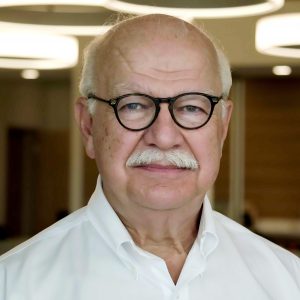 Dr. Chobanian was born in Pittsburgh, Pa., and is a graduate of the University of Notre Dame and the University of Pittsburgh School of Medicine. He did his internship, residency, chief residency and fellowship in gastroenterology all at the National Naval Medical Center in Bethesda, Md.

During these years of Navy service, Dr. Chobanian attained the rank of Commander in the United States Navy Medical Corps and became Assistant Head of the Division of Gastroenterology at the Bethesda Naval Hospital.

He is the author of more than 80 abstracts, articles and chapters in medical journals and is the editor of a book of clinical problems in gastroenterology, now in its second edition. In addition, he is the co-editor, with Dr. Overholt of the textbook, “Office Endoscopy.” He has received the Excellence in Teaching Award from the intern class of the Bethesda Naval Hospital, the Outstanding Contribution to Mission Award of the National Naval Medical Center and a Navy Commendation for the care of President Reagan.

Dr. Chobanian served as chief of the Medical Staff and Director of the Gastrointestinal Lab at St. Mary’s Medical Center. In 1997, he was elected President of the American College of Gastroenterology, having served on its Board of Trustees for six years.

Dr. Chobanian is married to Dr. Ruth Bailey, a local dentist and author.